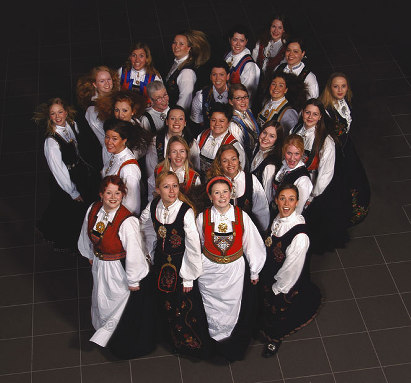 Voci Nobili was established in 1989 by its present conductor, Maria Gamborg Helbekkmo. The choir consists of about 25 female singers, most of whom are students at Bergen University College or the University of Bergen.The singers are accepted on the basis of an audition. None of them are professional, but they all spend an average of 500 hours a year with the choir, rehearsing, competing and giving concerts. The choir, which has gained wide recognition as an exceptionally fine vocal ensemble, has given a number of concerts in Norway and abroad, and has won several national and international choral competitions.

Maria Gamborg Helbekkmo (b. 1942) Helbekkmo is an associate professor at Bergen University College, where she teaches choir conducting, piano and solo voice. She conducts  Jentekoret (The Girls Choir) and Voci Nobili, both choirs connected to Bergen University College. She has been the artistic director of Bergen Philharmonic Choir, and in 2000 she was in charge of Voices of Europe, a collaborative project between the European Cultural Cities. From 1993 – 1998 Helbekkmo was a guest lecturer at the Norwegian Academy of Music in Oslo. Helbekkmo can point to a long career as a musician as well as a teacher. She has given several piano recitals and also been a soloist with several prominent orchestras. She has toured with both the Norwegian and Swedish Concert Academies, and she worked for many years as a freelance musician for the Norwegian Broadcasting Company, (NRK); making music programs for children. She studied choir conducting with Eric Ericson (Stockholm) and Knut Nystedt (Oslo), voice with Paul Lohman (Wiesbaden), Gunvor Mjelva (Oslo) and Ellen Sundby (Bergen), and the piano with Eline Nygaard (Norway), Bela Siki (Seattle), and Adele Marcus (Juilliard School of Music, New York).

Maria Gamborg Helbekkmo has given numerous concerts with Voci Nobili both at home and abroad. Her determination - combined with her artistic abilities, her unique musical ambiance and her insistence on subtle musical expression and homogeneity of voices - has won Voci Nobili numerous national and international awards. Despite the constant changes in choir membership, Helbekkmo has managed to maintain Voci Nobili's high standard throughout. Helbekkmo is a frequent lecturer at international congresses, and she is in even higher demand after Voci Nobili’s 2005 American Tour. This autumn she is giving master classes both in New York and on Wellesley College in Boston. In 1996 Helbekkmo received the Bergen City Annual Artist Award for her work as a choir leader, and in 2002 she was acclaimed “Best conductor” at the international choir competition in Riva del Garda, Italy.

Kontraster – contrasts, the term speaks for itself. This third CD by Voci Nobili is a collection of contrasting pieces from the 20th century. Church music is still a living tradition, and during the last century a vast repertoire of great choral composition has arisen within this genre. This recording introduces a selection of songs with texts connected to the Virgin Mary, the compositions almost spanning the entire century, from Gustav Holst to Knut Nystedt. Halfway through, the style gradually shifts to jazz by way of John Rutter’s choral suite Birthday Mardigals, which contains elements from both styles, and Ward Swingle’s unique blend of baroque and jazz in the ingenious Reeds of Innocence. Voci Nobili celebrates the centennial anniversary of the birth of George Gerswin by letting his music introduce the record’s jazz section, which also contains standard-jazz pieces like Lullaby of Broadway and Makin’ Whoopie. The recording ends with a collection of modern folk songs by singer/songwriter Alf Prøysen, who has a constant place in the heart of every Norwegian.

Listen to My True Love Has My Heart in Real Audio

Voci Nobili’s fourth album consists of Norwegian music only, with emphasis on the classic composer Edvard Grieg and contemporary Knut Nystedt. Edvard Grieg's Barnlige sange are seven songs for children, with lyrics from Nordahl Rolfsen's "Reader for Primary School,” a textbook read and loved by several generations of Norwegian schoolchildren. “A Grieg-bouquet”, with well-known pieces like Last Spring and Solveig’s song, has been arranged for the choir by Carl-Bertil Agnestig. Shells, by Knut Nystedt, has been a part of Voci Nobili’s repertoire for years, and the recording of Realm of Senses by Nystedt is the first of its kind. Two Norwegian folk tunes and a contemporary wedding march inspired by Norwegian traditional music and jazz also find their places on this recording.

Voci Nobili’s second CD features British composers Benjamin Britten’s Ceremony of Carols and John Rutter’s Dancing Day. A Ceremony of Carols was inspired by “The English Galaxy of Shorter Poems”, and is written for treble voices and harp. The ‘carols’ are a product of 15th and 16th century writers, most of whom are anonymous. They retain their unique flavour by Britten’s extensive use of old English language in the style of Geoffrey Chaucer’s “Canterbury Tales.” The piece in its entirety shows Britten’s mastery of choral music, with each movement in contrast with the next. In Dancing Day, John Rutter employs the words and melodies of six traditional carols and resourcefully exploits their various rhythmic qualities in this cycle of for SSA voices with harp or piano accompaniment.