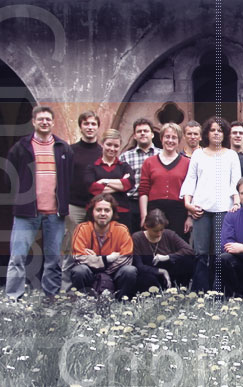 In 1998, Hanno Kreft, former member of the World Youth Choir founded the Nordic Chamber Choir. Under the direction of its conductor Nicol Matt, this young ensemble developed very quickly into one of the leading chamber choirs in the world, and triumphantly carried off second prize in the Internationaler Chorwettbewerb Marktoberdorf 2000, one of Europe’s most prominent choral competitions. In April 2002 the choir changed its name to Chamber Choir of Europe to reflect its international character; the young and professionally trained singers of the CCE come from ten different countries in Europe, and rehearse regularly in Southern Germany.

The repertoire of the CCE encompasses a stylistically and historically large spectrum that extends from the Renaissance, through the Romantic period and further into the 21st Century. Working with contemporary European and American composers is an important focus of the choir’s work. Artistic diversity and outstanding musical interpretations are the hallmarks of the CCE, which can be clearly heard in their numerous CD recordings. The ensemble has already recorded the complete sacred choral works of Mozart and Mendelssohn, the complete Bach chorales, the Petite Messe Solennelle by Rossini, and numerous a cappella compositions by Morten Lauridsen, John Rutter and Bob Chilcott, all of which have sold more than a million copies worldwide.

Nicol Matt enjoys as conductor of the Chamber Choir of Europe an excellent reputation worldwide. Rewards as the 2nd price of the Internationaler Kammerchorwettbewerb Marktoberdorf 2001, invitations to national and international festivals as the Rheingau Musik Festival and outstanding reviews of the recordings make the Chamber Choir of Europe into one of the worldwide leading ensembles. Nicol Matt was born in St. Georgen, studied church music and conducting in Stuttgart, Trossingen and Strasbourg, and then honed his craft by taking further classes with Eric Ericson and Frieder Bernius.After producing a number of CDs as an organist he has concentrated on choral and orchestral conducting. Concert tours to Canada, the USA, Spain, Greece, the Netherlands, France, Belgium, Hungary and Switzerland were very successful.

Considered to be one of America's foremost contemporary composers Morten Lauridsen is a master of writing choral music that is harmonically lush, contrapuntally interesting, melodically memorable, and gratifying to sing. This disc brings together four of his most popular works, which include three cycles -- Les Chansons des Roses, Lux Aeterna, Madrigali -- as well as his setting of O Magnum Mysterium. The Chamber Choir of Europe, conducted by Nicol Matt, sings with warmth and a secure tone. Matt conducts with sensitivity, giving the music plenty of room to breathe, with tempos generally on the relaxed side. The choir is particularly effective in the moving and densely chromatic a cappella O Magnum Mysterium. Lux Aeterna is heard in its version with organ, played by Jörg Halubek, rather than with instrumental accompaniment. The composer provides sensitive accompaniment on the piano in "Dirait-on," the final (and only accompanied) song in Les Chansons des Roses. The sound is warm and intimate. While the performances fall short of being sublime, this CD would be a good introduction to the variety of Lauridsen's work for anyone interested in accessible and gratifying new choral music.

Famous as a great symphonist and fine chamber music and a number of large-scale works for chorus and orchestra, Johannes Brahms is often overlooked for his sacred and secular works for choirs of more modest proportions. His romanticism and love of early music and folk song make these choral works so easy to sing and hear. This CD features 12 cuts, 4 movements of the accompanied "Gesange fur Fravenchor, 2 Horner und Harfe op. 17," 7 movements of the a cappella "Sechs Lieder und Romanzen op. 93a," 3 movements of the lovely a cappella "Marienlieder op.22," the beautiful a cappella "Ach, arme Welt, du trugest mich op. 110, Nr. 2," and the 2 soaring, harmonic a cappella movements of "Zwei Motetten op. 74." Conductor Matt directs the international Choir superbly, and our appreciation of this group, and for Brahms' "blue collar" choral works, couldn't be higher!

The 36-strong, mixed-voice Chamber Choir of Europe, founded as the "Nordic Chamber Choir" in 1998 under the direction of Nicol Matt, developed very quickly into one of the leading chamber choirs. The Choir changed its name in 2002 to "Chamber Choir of Europe" to reflect its international character, boasting professionally-trained singers from 10-different countries. Mozart's "C Minor Mass, K. 427" is one of the most beautiful and significant pieces in the composer's life, as it was the fulfillment of a promise Mozart made to his father in a 1783 letter to write a Mass if he were permitted to marry Constanze Weber. The mass has 12 beautiful, dramatic movements (all orchestrally accompanied): the turbulent "Kyrie" and wonderful "Gloria," the operatic "Domine," "Qui tollis" and "Quoniam," the magnificent "Jesu Christe," the joyous "Credo," and the dramatic "Sanctus" are some favorites, but keep in mind that Mozart is simply brilliant and the entire Mass takes our breath away. Following that are 11 short Chorales by Johann Sebastian Bach, "Jesu meine Freude," "Wachet auf, ruft uns die Stimme," "Christus, der is mein Leben" and others, all accompanied. Matt's work as conductor, the singing of this exquisite Choir, and these sublime sacred pieces are all perfect!

Felix Mendelssohn Bartholdy (b. 1809) received a classical music education during a period of stylistic upheaval at the beginning of the Romantic Era. Influenced by the late works of Beethoven and Schubert, Mendelssohn set out to strike a balance between the burgeoning romanticism and his own, more classically-oriented, outlook. That he succeeded in this is clear in secular works such as the Italian Symphony and the Hebrides overture. Greatly affected by the work of Bach, his purpose in the area of sacred music grew to essentially redefine the function and liturgical role of church music. Here we have 19 examples of Mendelssohn's dynamic, revolutionary sacred music, beginning with the dramatic "Kyrie in d fur gimischten Chor, Soli un Orchester," and then the 18 movements of "Der 42. Psalm "Wie der Hirsch schreit" op. 42." These range from the haunting oboe and soprano solos of "Aria" and "Recitativo/Arie" to the triumphant horns and orchestra of "Schlusschor;" the sweet soprano a cappella strains of "Hebe deine Augen auf fur dreistimmigen Fravenchor" to the Gregorian chant-like "Beati mortui/Seliq sind die Toten, aus: Zwei geistliche Mannerchore op. 115 fur vier Stimmen" and "Zum Abendsegen "Herr, sei gnadig" fur vierstimmigen gemischten Chor." This is beautiful, powerful sacred music, penned by a master composer and sung by one of the finest chamber choirs in the world